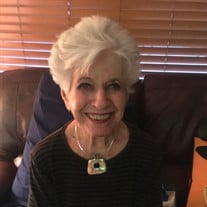 Carol Lipsky Carol Lipsky passed away on December 6, 2021, completing a 92 year journey of sharing happiness, compassion, love and hope to all she met. If you needed help, she provided it. If you didn’t need help, she would ensure you were helped, anyway. If you were in her home, you were fed and made comfortable. If you needed a job, she would hire you or find you a job. If you needed someone to care about what you were thinking, she ensured that you knew that she cared. And for some, if you needed a ‘kick in the pants’, she would ensure you got what you needed. Carol was born October 11, 1929 in New York to Aline and Louis Schwartz. She moved to Miami Beach in 1947 and transferred to the University of Miami. She took three busses each way to get to and from school. She also worked part time at Burdines in downtown Miami, ran the school paper and still graduated early. In 1950, Carol married Simon, the love of her life for 62 years. She had two children, Larry and Jerry. Carol taught nursery school at Temple Beth Am and Kindergarten at Vineland Elementary in Miami, and then at Charles Drew Elementary in Liberty City. Carol transitioned from teaching in the early 1970s to provide full time support to the family businesses, Bird Marine in Miami and Bird Marina on Long Key. Carol loved to play tennis, go camping, play Rummy-Cube, dabble at the casino, and enjoy quality time with family and friends. Sharing a good John Wayne flick or other classic movie with her grandchildren or great-grandson, Mako brought her true joy. Spending time in the mountains at Wolf Laurel, North Carolina was her favorite, followed closely by a successful hunting excursion at the sale rack of many fine clothing retailers. Carol wrote poems. Several were published or received awards. Carol spent her “retirement” working for Bloomingdales and Coldwater Creek, and doing extensive volunteer work for Cancer Support Groups, the Hearing Loss Group in Delray Beach, Delray Medical Center, and the Huntington Pointe “Snowbirds” Bowling League. Carol’s favorite endeavor was serving at the Delray Beach Seniors vs Crime Office. Even at age 90, Carol was their number one volunteer, helping other senior citizens recover thousands of dollars from businesses that were providing less than fair services. Carol is survived by her son Jerry, daughter-in-law Sally, grandson Andrew and his wife, Savannah, and great-grandson Mako. Carol was preceded in death by her husband, Simon, son Larry, and grand-daughter Melanie. A brief service will be held Tuesday December 21st at 1030 AM at the South Florida National Cemetery, Lake Worth, Florida

Carol Lipsky Carol Lipsky passed away on December 6, 2021, completing a 92 year journey of sharing happiness, compassion, love and hope to all she met. If you needed help, she provided it. If you didn&#8217;t need help, she would ensure you... View Obituary & Service Information

The family of Carol Lipsky created this Life Tributes page to make it easy to share your memories.