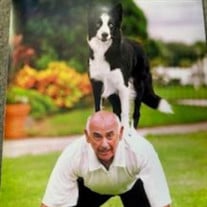 David Holzman July 6, 1934 - June 1, 2021 David was the second child and first son of Irene and Michael Holzman. David was born in the family’s home in London, England. When just a small boy in 1940, he, his older sister by two years, Julie, and younger brother by two years, Ron, were literally shipped off with their British Mom to South Africa (where they narrowly missed being torpedoed) to be kept safe from the blitz. That’s where Irene’s sister Dolfanna, her South African husband Lester, daughter Rochella and son Colin lived. They settled in Johannesburg. David’s Canadian dad, Michael, who had come to England years earlier for business (thereby meeting his future wife, Irene) remained behind and was in the British Army for the duration of the war, separated from she and their children for five years. When the war in Europe was over in 1945 the family reunited in England. In 1948 the family moved to Montreal, Canada to be near their Dad Michael’s parents. So much moving for a young teen. David, as a young’un, apparently made lots of noise with whatever he could lay his hands on and thankfully a drum set was procured. Fast forward: music studies, moving to New York in the 1950’s, joining the musician’s union…David became a professional and very talented drummer. He played in bands in hotels, on cruise ships and other venues for many years. Eventually David tired of working mostly at night and moved to Florida where he learned how to groom dogs and opened a doggie salon. David then took up dog obedience training and in 1973 he and his poodle “Sir Charles of Ruislip Manor” (the area in London where he lived post-war with his family) won the top US title for dog obedience. David and his late partner, Shyne Browne, then began to breed Hyacinth Macaws, the largest of the Macaws, with their beautiful blue plumage. Feeding the chicks when hatched became an almost fulltime occupation as the babes were incubated for safety and there were many of them over time. David continued his interest in dog obedience and competed with his Border Collie “Buddy” at the Cruft’s dog obedience shows in England. His family includes his brother Ron, Ron’s daughter, Dalit, David’s younger sister Danielle (who was born in Canada after the family moved there) and his late sister Julie’s children, Sidney and Brian Rodgers, Dalit’s daughters Amalina and Starla and cousins he both knew, including Rochella and Colin (Dolfanna’s children) and those he did not meet. A life lived to the fullest has left us.

The family of DAVID HOLZMAN created this Life Tributes page to make it easy to share your memories.

David was the second...