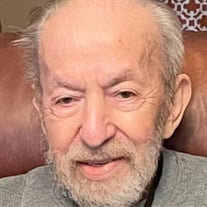 David P. Mitteldorf, 90, died March 9, 2022 in Indianapolis, Indiana. Dave (“Call me Dave”) was born May 22, 1931 in Brooklyn, New York. He was a veteran of the United States Air Force, having served in Korea at the Taegu Air Base (K-2) from 1951-52. He wore his “Veteran” cap with pride, and was appreciative of the opportunity to take an Honor Flight to Washington, DC in 2016. Upon his discharge from the Air Force, he graduated from Texas A&I University in Kingsville, TX in 1960 with a degree in physics. Dave married his wife, Rosanne (Pear) in 1961, and they were together until her death in 2017. He is survived by his daughter, Debra S. Willams (f. Jamie Qualls), Indianapolis, IN; son, Kenneth J. Mitteldorf (w. Jo Anne), Setúbal, Portugal; grandchildren Hillary Williams, Cincinnati, OH, Madison Williams, San Diego, CA, and Joseph Mitteldorf, Setúbal, Portugal; and numerous cousins, nieces, and nephews. Dave was preceded in death by his parents, Leon and Anne (Nissenbaum) Mitteldorf, his brother, Monroe Mitteldorf, and his sister, Rhoda Ratner. After graduation from college, Dave took a job as an electronics engineer with RCA in Lancaster, Pennsylvania. In the late-1960’s, Dave went to work with the Amperex Electronics Corp. division of North American Philips, in Slatersville, RI, where he became the Marketing Manager for the Plumbicon camera tube product line. In 1981 he moved to Fort Wayne, IN to work for ITT Corporation, before returning to Rhode Island to work again for Amperex until his retirement in 1992. His career required him to travel extensively throughout North America and Europe, and occasionally beyond, and one of his favorite memories was the trip to Japan and Australia accompanied by his wife, Rosanne. In retirement, Dave and Rosanne moved to Boynton Beach, Florida, which served as their base of operations for travel around the world. They especially enjoyed cruises, and took countless trips up both coasts of North America, throughout the Caribbean, Europe, and elsewhere. As Dave’s health declined, he decided to move to Indiana to be closer to his daughter. A lifelong Washington football fan, Dave had shifted his allegiance to the Miami Dolphins in his retirement. Since he moved to Indiana just before the commencement of the NFL season, he was able to enjoy Sunday afternoon football with his daughter and her fiancee, Jamie, with comfort food and good natured banter throughout the season. Although his mobility was limited, his zest for life was not diminished. Dave was always the guy who knew every employee at the grocery store, the library, his many doctors’ offices, and until his final days that attitude persisted. His children were surprised (but also not surprised) to learn after his passing how many of his caregivers had shared memorable conversations with Dave in his last months. Dave’s children want to thank a few people who took especially good care of their father. First is Marie Nicolas, who was an aide and good friend for so many years. Especially during his last years in Florida, Marie cared for our Dad with loyalty, dedication, and tenderness. She allowed him to maintain his dignity when old age threatened it, was able to boss him around when necessary, and never failed to respond enthusiastically every morning when Dave greeted her with a hearty “Bon jour, Mademoiselle!” When Marie attained her US citizenship, nobody was more proud than Dave. Second to thank is Dr. Louis Tumminia of Delray Beach, Florida, Dave’s personal physician for so many years. Dave would tell anyone willing to listen that Dr. T was “the world’s greatest diagnostician,” but more importantly, Dr. T truly was our Dad’s friend. He entertained endless questions, explained the etiology of Dad’s various ailments in sufficient detail to satisfy his demanding patient, and attended to his medical needs with honesty, professionalism, and compassion. Finally, our Dad spent his last year at Woodland Terrace in New Palestine, IN. Too many nurses, CNA’s, aides, and various patient care team members to name individually were always cheerful, attentive, and caring to a fault. We thank you all for the excellent care and companionship you provided. Special thanks to Martha Struck and Donna Andis for your warm friendship and comfort. Our Dad was the last of the “Old Guard,” the last surviving representative of his generation from his side of the family. He, and the other relatives who connected us to those older times, will all be missed. Contributions in memory of Dave may be made to Franciscan Hospice House, 8414 Franciscan Ln, Indianapolis, IN 46237.

The family of David Mitteldorf created this Life Tributes page to make it easy to share your memories.

Send flowers to the Mitteldorf family.