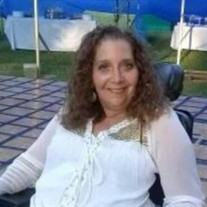 Deborah Krotenberg died on February 10, 2022, just 13 days shy of her 55th birthday. She is survived by her parents, Ethel and Marvin Krotenberg, her sister and brother-in-law, Laura and Stephen Zipris, her niece and nephew, Micayla and Daniel, and her devoted service dog Maeve. Deborah was born in New York and lived there through college. She received her Bachelors of Science in Sociology and English from SUNY Albany and then moved to Atlanta, Georgia, where she earned her JD from Emory University. She began her career as an attorney for the law firm of Alex Byers, Columbus Georgia, and Zirkle and Hoffman, Atlanta Georgia. A catastrophic car accident in 1995 rendered Deborah a quadriplegic and after a year of hospital and rehab, Deborah rebuilt her life. Determined to be independent, she moved back to Atlanta where she was supported by her long-time caregiver, companion, and friend, Ms. Charlotte Jackson. Because of the amazing support she received from Charlotte, family, friends and colleagues, Deborah thrived. She found personal and professional satisfaction for the past 21 years as the Director of Rehabilitation and Managed Care at the Georgia State Board of Workers Compensation. Deborah was actively involved in her synagogue life at Congregation Bet Haverim (CVH), Atlanta Georgia and at Shepherd Center, Atlanta, Georgia, where she served on their Board and was an active peer supporter. Services celebrating her life will be held this Tuesday, February 15th, 2022 at Beth Israel Memorial Chapel in Boynton Beach, Florida at 1 PM followed by a gravesite burial at Eternal Light Memorial Gardens. Services will also be livestreamed. Donations can be made in Deborah’s honor at Shepherd Center in Atlanta Georgia and at Canine Assistants, Atlanta Georgia. Both of these organizations were meaningful to Deborah and helped her tremendously with her recovery and independence.

Deborah Krotenberg died on February 10, 2022, just 13 days shy of her 55th birthday. She is survived by her parents, Ethel and Marvin Krotenberg, her sister and brother-in-law, Laura and Stephen Zipris, her niece and nephew, Micayla and Daniel,... View Obituary & Service Information

The family of Deborah Krotenberg created this Life Tributes page to make it easy to share your memories.

Send flowers to the Krotenberg family.