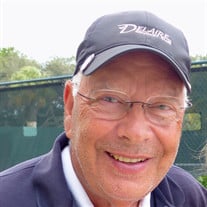 Edward A. Fox (“Eddie”) 81 years old, died September 26, 2021, at his home in Delray Beach, Fl, with his wife and daughters by his side. He is survived by Sherry, his wife of 57 years, his daughters Donna (Matt) Goodhart, Julie (Stewart Booden) Fox, his grandsons Hayden Meir Goodhart and Trevor Dylan Goodhart, treasured brother and sister-in-law Mickey and Ingrid Kuper, nieces Kira (Larry) Zahn and Adina (Jason) Chirogianis, a sister, Leslie Sadovi, great nephews and a great niece, cousins and friends. He treasured his family, took great pride in his daughters both personally and professionally, watching and mentoring Donna as she followed in his footsteps as a pharmacist, and respecting and admiring Julie as she became an attorney, a fierce advocate and excellent litigator. Matt, his son-in-law of twenty years, was the son he never had, and in the four years Stewart has been in the family he grew very fond of him and his four children. His grandsons were the shining light of his life. He was Captain Killer when they were young, attacking them in the pool, he cheered for them at their baseball and basketball games, watched them play tennis and never enjoyed golf more than when he played with Hayden and Trevor, giving them welcome instruction. He and Sherry lived a wonderful life filled with good friends, good food, travel and a shared love of all things Jewish. In his final few days, they played the game of naming best restaurant, best trip, best hotel, worst hotel and so forth. Eddie loved classical music and the opera; the car radio was set to classical, opera, country and western, 50s music and rock & roll. Eddie was a registered pharmacist from 1964 until his retirement in 2020. He was founder and co-owner of Parkway Drugs, the last remaining chain of independent drugstores in the greater metropolitan Chicago area. He also owned clinic pharmacies and managed the outpatient pharmacies for Mt. Sinai Hospital. He was a successful businessman who was proud of his reputation of being tough but always fair. Eddie was a pillar of the Jewish community in Chicago where he worked tirelessly, notably with JUF, to better the lives of Jews in the Chicago area, in Israel, in Europe, the Soviet Union and wherever Jews were in need or being persecuted. He and Sherry led the 2nd mission from the United States to Cuba, in December 1996; and he went to Israel more than two dozen times on JUF business, to lead JUF Missions with Sherry, and, most notably, to spend a summer in an apartment in the hills of Haifa with Sherry, Donna and Julie in 1982. His most meaningful trip. He worked tirelessly with the Illinois Holocaust Foundation from their little building in Skokie, being the only non-survivor on the board through their move to the new Illinois Holocaust Foundation and Education Center in Skokie. He worked closely with now Governor J.B. Pritzker to bring that project to fruition. Eddie’s leadership roles in the Jewish community were too numerous to mention (and being a man of humility, he never did). Among his many positions at Federation, he was Chairman/President of the Board and recipient of its highest honor: The Julius Rosenwald Award. Eddie was a wonderful athlete. He bowled, played baseball and basketball, was yo-yo champ of the City of Chicago and caddied as a young teenager where he learned to love golf. This lasted throughout his life; the last show he watched was the Ryder Cup telecast. His handicap went from a low of 8 to a high of 13. His final handicap was a 12; he was so competitive and loved playing with his guys so much. At the age of 80, the day before he was diagnosed with head and neck cancer, he shot 78. Not the first time he bested his age. As with all of his endeavors, he was disciplined, played by the rules, practiced hard and often, and was known to use colorful, expressive if not socially acceptable language when he didn’t play up to his expectations. Then it was over and he played again the next day after practicing what needed to be corrected. His best friends were those he came to through Jewish Federation and golf and a few high school friends he stayed close with through the years. He will be remembered as the best husband, father and papa ever, a true and devoted friend to many, a Jewish philanthropist of the highest order, a successful businessman and a fiercely competitive golfer, a lifelong, diehard Cubs fan, Bears fan and Bulls fan, and a good Jewish heart and soul. In lieu of flowers, memorial contributions may be made to the JUF Edward A. Fox Memorial Fund c/o JUF. Please indicate that the gift is in Eddie's memory. https://www.juf.org/tribute/Tribute-Cards.aspx May his memory be for a blessing. Services will be held Wednesday, September 29, 2021 at 1:00 pm. Beth Israel Memorial Chapel, Delray Beach, Florida. Interment to follow at Eternal Light Memorial Gardens. To view service virtually please click link below: http://webcast.funeralvue.com/events/viewer/61073/hash:61E6EB0366EBDCB9

The family of Edward A. Fox created this Life Tributes page to make it easy to share your memories.