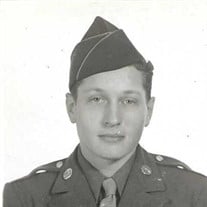 Eli "Russ" Bonder enjoyed his last Nathan's Frank, cup of coffee and Entenmann's chocolate donut on September 27, 2021. He passed from this world and rejoined his beloved brothers, Morris and Phil, on September 28, 2021. This was a man who chose to meet the end of his life on his own terms: at home, surrounded by many of those he loved, fully and fiercely independent, and refusing to spend one more unfulfilling cent of his hard-earned legacy on an inadequate health care system. He knew what he wanted and had the will to see it through. Eli Bonder was born in his family's home in the Bronx on April 23, 1925. He always said that he had no middle name because he was the youngest child and the family had run out of them. But he found his own name in his childhood neighborhood. His wild and unruly head of hair reminded his friends of "The Mad Russian", and Eli adopted "Russ" as his chosen name. Russ passed away at the age of 96 years and 5 months, in the community of Ponte Vecchio in Boynton Beach, Florida. Young Russ was always good at sports. He loved to play ball at the schoolyard near his home. When he was in the Army, he was the catcher for his unit's baseball team, a key position. He followed sports because he was himself an athlete. He was also an artist, though he was unlikely to describe himself that way. He created works of art using nature: rock gardens, mobiles made of wood. And he could draw as well. Russ was an excellent student at school, especially in math. He was so exceptional at math, he was able to achieve the highest score on the math section of the IQ test in half the time required to get that score. He enjoyed doing taxes for others each year, and he had relationships that spanned decades through that activity. He continued to do taxes through the last year of his life. Russ had many friends, even though he was quiet in a group. He was an extremely loyal friend and was loved and appreciated by his peers throughout his life. He outlived most of his "Greatest Generation" friends and felt sadness with each of these losses. He was drafted into the Army in 1943. He was recommended for an officer training program, but since he had previously learned Morse Code, he became a radio operator in the Infantry. He earned the rank of Technical Sergeant and directed artillery fire from the front lines over the heads of his unit. His unit still suffered many casualties. He once shared that he was so scared at times, he would pull his jacket over his head while directing fire that flew right over him. He was 19 years old. Russ was proud to be part of the Battle of the Bulge and the Red Ball Express, both important operations for the Allies. He was gifted in learning languages and understood French without any formal training. His familiarity with Yiddish enabled him to become the translator for his unit when interacting with German POWs and civilians. At the age of 19, he was appointed temporary mayor of a liberated town in Germany due to his ability to communicate with the residents. He then used his skills to help women and children in Displaced Persons camps at the end of the war. After returning from the Army, Russ attended Pace University, graduating with a BS in business administration. He was a clear thinker and steadfast in pursuing his goals. He understood the stock market. He eventually became a high school teacher and was cited by his students as a favorite teacher due to his kindness and patience, as well as his sense of humor. Russ had a wonderful, droll sense of humor that came out in unexpected ways. When asked a few years ago by his children, "When the time comes, what kind offuneral arrangements do you want?" his response was, "Surprise me!" A life-long athlete, Russ enjoyed waking his family at 3 AM each weekend to drive to go skiing. Being an extremely frugal man, driving to Vermont at 3 AM pleased him much more than paying for overnight accommodations. He wouldn't pay for ski lessons, yet he never fell. Though he greatly valued frugality, Russ was very generous to those he loved through frequent acts of service and gifts. Russ may have been a quiet man, but he was Still Water that ran deep. He was always gentle, thoughtful and kind. He was a man that dogs who had been previously traumatized, and were fearful of strangers, would intuitively trust to approach and lay their heads on his lap. He loved to parent his children and was an incredibly loyal caregiver. He married twice and had a close girlfriend until the end of his life. He was a loving and caring stepparent and grandparent. He didn't hesitate to accept and embrace diversity in his children and grandchildren. He is survived by his two children, three stepchildren, and numerous grandchildren, nieces, and nephews. Russ Bonder lived his life with fierce independence and a strong will, yet he was loving and caring and funny and loved by all who knew him. He graced us with his presence. He will be truly missed. His funeral will be held at 1:00 PM on Thursday, October 7, at Calverton National Cemetery, 210 Princeton Blvd., Calverton, NY 11933.

Eli "Russ" Bonder enjoyed his last Nathan's Frank, cup of coffee and Entenmann's chocolate donut on September 27, 2021. He passed from this world and rejoined his beloved brothers, Morris and Phil, on September 28, 2021. This was a man who chose... View Obituary & Service Information

The family of ELI RUSS BONDER created this Life Tributes page to make it easy to share your memories.