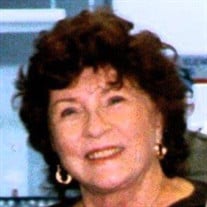 Gloria A. (Marcus) Weger Gloria A. Weger, 94, of Delray Beach, Florida, passed away on June 19, 2021, at Boulevard Rehabilitation Center, Boynton Beach Florida. Gloria was born March 24, 1927, in Bronx, New York, to the late Harry and Betty (Elbogen) Rubin. Gloria grew up in Brighton Beach, Brooklyn, New York. As an adolescent, Gloria and her parents also resided in Harrisburg, Pennsylvania for one year. Gloria married Aaron Marcus in 1948 and resided in Harrisburg with her family for over twenty-two years. Gloria moved to Florida in 1970 where she continued to reside until her passing. In 2002, Gloria married Harry Weger, who preceded her in death in 2008. Gloria was a beautiful, kind, sweet and generous person. She had an amazing zest for life and was constantly busy and living life to its fullest. She loved her jobs in retail where she could interact and be helpful to people. Gloria loved her friends with whom she played mahjong, entertained, attended shows and theater, cruising, dancing and dining. She was also president of her bowling league. She loved big band music and especially loved Frank Sinatra. Gloria was also an animal lover and rescued several over the years. Above all else, Gloria loved her family, especially her children. She will be deeply missed by all those who knew and loved her and by those whose lives she touched. Gloria is survived by her children, daughter Joni Young and her husband Harold, of Harrisburg, two sons, Steve Marcus and his wife Gerie, of Harrisburg and Robert Marcus of Harrisburg; Grandchildren, Damon Young, Heather Titus, Christopher Marcus and Gretchen Robinson; Great grandchildren, Saraya, Andy, Robbie, Adriana and Joe. Services will be held Thursday, July 15, 2021 10:45am at Eternal Light Memorial Gardens, Boynton Beach, Florida In lieu of flowers, the family requests memorial contributions be made in Gloria's honor to the Alzheimer's Association, or to ASPCA ( American Society for the Prevention of Cruelty to Animals) or to Trustbridge Hospice Foundation (www.trustbridgefoundation.org)

The family of Gloria A. (Marcus) Weger created this Life Tributes page to make it easy to share your memories.