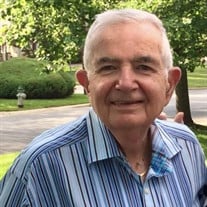 Howard חיים בן טודרוס (Hebrew name) passed away surrounded by his wife and daughters on Friday, August 6th, 2021 at the age of 88. The son of Bertha & Theodore “Teddy” Krizer, Howie was born December 3, 1932 in Brooklyn, NY. Howie is survived by Roberta “Bobbie” (Gold) Krizer, his wife of 60 plus years, whom he married on November 13, 1960 at the West Hempstead Jewish Center in West Hempstead, Long Island, New York. Howie was a loving and devoted father to four daughters and son-in-laws. Mara & Anthony Lepore, Sherri & Marc Kratenstien, Jodi & Keith Graber, and Heidi & William Daroff. He also leaves behind his sister and brother-in-law Anise & Moe Freed. Amongst his proudest accomplishments were his seven grandchildren Franki & her husband Robert, Zachary, Lily, Adam, Arianna, and Blake; as well as his two great grandchildren Calliope and Oscar. Throughout his life he has built community and lifelong friendships in Brooklyn, Edison, NJ and Boynton Beach, FL As a devoted member of Temple Neve Shalom in Metuchen, NJ, Beth Mordechai of Perth Amboy, NJ, and Chabad-Lubavitch of Greater Boynton; Howie was a devout Zionist who took tremendous pride in the accomplishments of Israel, having even volunteered with the Israeli Defense Forces. A graduate of City College in New York, Howie was a history buff and a devoted member of the Civil War Round Table of Lake Worth. Howie believed in loyalty to its purest definition, exhibited by his 50 years of service as a traveling pantyhose salesman for Mayer-Berkshire. A perpetual student and teacher, Howie trusted education as a means of growth, treating each conversation as an opportunity to both teach and to learn. Those who mattered most to Howie had a portfolio of newspaper clippings detailing the news and information which pertained to their specific interests or fields of study. He worked hard to embrace the modern conveniences of technology, eventually transitioning those clippings into a folder of emails for each of his loved ones. Anyone who knew him, could easily tell you about his love of hockey which he spoke of often, to anyone who had interest in the sport. He was a 50+ year season ticket holder of the New York Rangers and a proud member of the fabled “Blue Heaven”. Howie was an avid reader who enjoyed hot chocolate, black coffee and a muffin, films (especially Casablanca), a good & hot bowl of soup and an extra helping of raw onions. He treated friends like family and his time with family was what mattered most. Perhaps his greatest ability was his availability, making the time and effort to be there for every major life event for everyone who mattered most to him. In lieu of flowers, the family asks donations be made to any of the following charities: Thank Israeli Soldiers (thankisraelisoilders.org) Haddasah (Haddasah.org) Garden of Dreams Foundation (www.gardenofdreamsfoundation.org)

The family of Howard Krizer created this Life Tributes page to make it easy to share your memories.