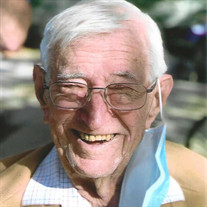 Irving Gabriel Manning, MD, passed away peacefully on January 10, 2022, at the age of 97, of complications from a Covid-19 infection. Dr. Manning was born in Brooklyn, New York on March 2, 1924, to Molly Mendelsberg (née Bavnik) and Jacob Mendelsberg. He had two elder siblings, Simon and Lillian, both of whom predeceased him. He graduated from Lafayette High School in Brooklyn in 1941, continued his education at the University of California Berkeley, the University of Oklahoma School of Medicine, and the Long Island College of Medicine, where he received his MD in 1949. He served his country in WWII as an army private and again during the Korean Conflict as an Air Force captain and physician. After a residency at Kings County Hospital in New York, he became a board-certified orthopedic surgeon and was admitted as a fellow to the American College of Surgeons. He married the love of his life, Irene Gizelba, in 1951. Irving and Irene had three children: David Jan, James Bernard, and Richard Neal. Dr. Manning practiced orthopedic surgery in Bay Shore, New York and then in Lake Worth, Florida, after the family moved there in 1973. Many close friends and family members would follow the Mannings in moving to South Florida. Dr. Manning retired from medical practice in 1986. He and Irene were dealt a severe blow when eldest son David’s accidental death in 2006. Irving Manning was a passionate golfer and a colorful dresser with a fondness for sweets and a weakness for gadgets. He will be remembered for his gregarious personality, kindness, sense of humor, and above all as a devoted husband and father, and a wise, loving patriarch of his extended family. His beloved Irene passed away in 2012. He is survived by sons James and Richard and grandchildren Kaitlyn, Samuel, Joshua, Lauren, and Eli. A memorial service will take place at Beth Israel Memorial Chapel (11115 Jog Road Boynton Beach, FL 33437) on January 23, 2022 11:00am.

Irving Gabriel Manning, MD, passed away peacefully on January 10, 2022, at the age of 97, of complications from a Covid-19 infection. Dr. Manning was born in Brooklyn, New York on March 2, 1924, to Molly Mendelsberg (née Bavnik) and Jacob Mendelsberg.... View Obituary & Service Information

The family of Irving Manning MD created this Life Tributes page to make it easy to share your memories.