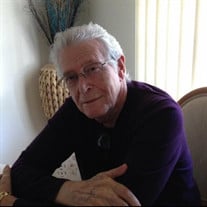 Manny Roman age 92 of Boynton Beach Florida passed on the morning of April 12, 2022. Manny was born to Edmund and Mania (Kahn) Roman on September 15, 1929 in Brooklyn New York. He is survived by his wife Esther Danhi Roman, sister Celia Roman Wortreich, children Robin Roman Murphy(Patrick Murphy), Pat Roman(Melissa Joyce), Craig Roman(Robin Winters Roman) & Michael Roman(Gary Paaren). Manny and Esther were wed for 63 years and cherished their close-knit family including their 5 grandchildren Lindsay Stein Phillips, Dara Stein Lauster, Jaime Stein Fields, Evan Roman & Matthew Roman, as well as 3 great grandchildren, Ava Phillips, Mila Phillips & Benjamin Fields. Manny was a devoted husband. His love bond with Esther was moving. His strong bond with his sister Celia was apparent they remained close since childhood, following each other from Brighton Beach to Sheepshead Bay and finally Boca Raton. He was a surrogate father to Celia’s children Karin and Meryl. Manny was active in the communities he lived. In Brighton Beach Brooklyn NY, he was an active member of the Shorefront YMHA Men’s Athletic Club as well an Oddfellow. Manny was also active in the International Ladies Garment Workers Union (ILGWU). He founded Starlite Apparel (a garment cutting, marking and grading company). To enhance his endeavor, he attended Fashion Institute of Design to computerize and automate operations. Manny was always the most stylish man in the room, after retirement he began an encore career in the men’s department at Bloomingdales. Even in his 90s, we were in awe of his stylishness. Anyone who knew Manny observed a generous, stylish, and empathetic man. He cared deeply for both family and friends often praying for their health and success in life. He believed in his Jewish Faith. His passions included Latin dancing, jazz music, golf, playing cards and dining with friends and family. Any of those who wish to attend the funeral service for Manny are welcome to pay their respects. Funeral service will be held at Beth Israel Memorial Chapel located at 11115 Jog Rd. Boynton Beach on 4/14/2022 at 11:00am. In lieu of gifts or flowers please donate in Manny’s name to Save the Children – Ukraine Emergency Fund.

The family of Manny Roman created this Life Tributes page to make it easy to share your memories.

Send flowers to the Roman family.