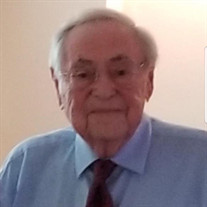 Murray Joel Brill, son of Cecilia (Caster) and Isidore Brill of blessed memory, passed on September 4, 2021 after 93+ years of a wonderful Journey, 54 with his cherished wife Helene (Freed) who survives him. “Uncle Murray” is also survived by his niece and nephew, Dinah PoKempner Kushen (of South Orange, NJ), and Marc PoKempner (of Chicago, IL and New Orleans, LA. Additionally, he leaves behind his nephew- and niece-in-laws, Lisa Falkowitz (of Burke, VA), Kenneth Falkowitz (of Knoxville, TN), Stephen Falkowitz (of Tampa, FL), Brian Freed (of South Riding, VA) and Rachel (Freed) Townsend (of Alexandria, VA), as well as sixteen grand nieces and nephews. Murray dearly loved his nieces, nephews and their progeny and was always willing to and did share with them his advice — solicited or not! Born in Pottsville PA, Murray joined the Navy right out of high school and served in WW II as an aircraft carrier radar operator. From there the GI Bill enabled his enrollment in Penn State University where he received a Bachelor degree in Business Administration. Murray then opened and operated for several years a Ladies Ready-to-Wear business in Hazleton, PA. He and Helene met and married in 1967. In 1971 they moved to Maryland where they opened and operated The Paper Doll, a Hallmark card shop in Rockville, MD, and The Perfect Touch, a gift store in Gaithersburg, MD. During their time in Maryland, they were both active in and Board Members of B’nai Israel synagogue. In 1982 Murray became an Insurance Agent for Connecticut Mutual and then Mass Mutual in the greater Washington DC area, his profession until retirement in 2005. Upon his retirement, they relocated to Boca Pointe in Boca Raton FL where they resided on the edge of and overlooking the golf course, eventually moving to nearby Edgewater at Boca Pointe, a staged continuing care retirement community. Both before and after the move to Boca, Murray was an avid golfer who loved the game’s challenges and its comradery --even though the game itself did not always love him back! His other major avocation was regular “let’s see the world” travel with Helene, all over and by air, land and cruise ship— the Far East, the near East, the Caribbean, Europe, and throughout the US, including Alaska and Hawaii. Murray’s family had a long-established commitment to charity and he and Helene have continued that commitment with their establishment and funding of a number of charitable trusts. In lieu of flowers, donations in his memory may be made directly to any of the following: Support Hadassah Hospitals; Children’s National Hospital; Support Johns Hopkins Medicine (Suburban Hospital); National Jewish Health. Services will be held Thursday, September 9, 2021 starting at 1:00 pm, Beth Israel Memorial Chapel, Delray Beach. Entombment to follow at Eternal Light Memorial Garden, Boynton Beach, Florida.

Murray Joel Brill, son of Cecilia (Caster) and Isidore Brill of blessed memory, passed on September 4, 2021 after 93+ years of a wonderful Journey, 54 with his cherished wife Helene (Freed) who survives him. &#8220;Uncle Murray&#8221; is also... View Obituary & Service Information

The family of Murray Brill created this Life Tributes page to make it easy to share your memories.