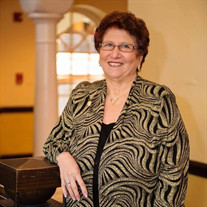 Rochelle “Shelley” Gill (Cohen) Siegel, of Lake Worth, Fl. Passed Away on May 11, 2022. Shelley was born in New Brunswick, New Jersey and moved to Florida as an infant. She lived in College Park Orlando as a young child and moved to Miami Beach where her father owned the Corsair Hotel and managed several hotels including the Shorecrest and Bel-Aire Hotels. In 1965 Shelley met the love of her life, Roy Siegel, in North Miami Beach and they married at the former Sephardic Jewish Center of Miami Beach in 1968. . Shelley was a devoted mother to Heidi and April. She was involved in their education, a girl scout leader, and was always their biggest champion. She enjoyed camping and traveling with her daughters. She was always up for a day of shopping, Disney or visiting a museum with them. Shelley became a Nona in 2005 to her only grandchild, Shoshana Alegra. Being a Nona was a job she waited her whole life to become and dedicated the rest of her life to loving Shoshana in a way only a Nona can. Shelley and Roy built a marriage based on a true partnership. They were business partners and partners in life. They enjoyed travel including camping, cruising and trips to Europe. Shelley was a terrific mom to many dogs and cats over the years, loved to play slot machines, and read or watch murder mysteries. Shelley’s love of decorative arts and architecture was evident in the family home. A natural hostess, Shelley created a home that was welcoming and comfortable for all guests. Over the last fifteen-years Shelley was involved in the Palm Beach County Chapter of the American Cancer Society and served on the leadership committee for a number of years for the Wellington Relay for Life. Shelley was an accomplished interior designer and educator. An early pioneer of Universal Design, she traveled the country promoting aesthetically pleasing universal design concepts for the home, workplace, hospitality and healthcare environments, fire safety in interiors and furniture, and the importance of professional licensing for interior design. She served as a past President of the American Society of Interior Design (ASID) Florida South Chapter. In 2004 she was inducted into the ASID College of Fellows in recognition of her professional achievements. In 2010, she was inducted into the ASID Florida South Chapter Hall of Fame, and In 2016 she was appointed by President Barack Obama to the US Access Board. As a Federal appointee. She participated in regulating and implementing the Americans with Disabilities Act. Shelley is survived by her husband of 53 years, Roy Siegel; daughters Heidi Siegel and April (Marcus) Kirk; granddaughter Shoshana Alegra Siegel; niece Ilisa (James) Oman; former exchange student Marcelo Guimares; and an extended family of cousins. Shelley was preceded in death by her mother Alegra “Alice” Bendavid Cohen, father Harry Isaac Cohen, and sister Sylvia Frank. Shelley was proud of her Sephardic heritage and her extended Bendavid, Cohen and Naar family. A private funeral will be held in Palm Beach County and the family will sit shiva with family and friends at the family home. In lieu of flowers, the family requests memorial contributions be made to the Spina Bifida Association in honor of Shelley’s granddaughter, Shoshana Siegel. Donations can be made by visiting www.sbevents.org/event/give or by mailing a check to: Spina Bifida Association 1600 Wilson Boulevard, Suite 800 Arlington, VA 22209. Donations can also be made to the American Cancer Society www.cancer.org/about-us/local/florida.html or 1-800-227-2345.

Rochelle &#8220;Shelley&#8221; Gill (Cohen) Siegel, of Lake Worth, Fl. Passed Away on May 11, 2022. Shelley was born in New Brunswick, New Jersey and moved to Florida as an infant. She lived in College Park Orlando as a young child and moved... View Obituary & Service Information

The family of Rochelle "Shelley" Gill Cohen Siegel created this Life Tributes page to make it easy to share your memories.

Send flowers to the Siegel family.