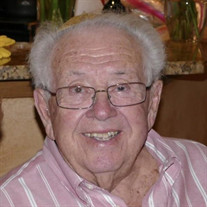 Seymour Krinsky passed away in Lake Worth, Florida, on Father’s Day, June 20, 2021 at the age of 92 at the home of his daughter surrounded by his family. Seymour was born and grew up in Brooklyn, New York. He lived in Brooklyn with his mother, father, grandparents, aunts and uncles and other extended family members. He attended Brooklyn Tech High School where he excelled at sports earning a place on the All Scholastic Men’s Soccer Team. Seymour met his wife, Irene Stern, the love of his life, at Banner Lodge in Connecticut and was married soon thereafter. They were happily married for just over 50 years raising their three children in Massapequa, New York. Seymour was a very successful businessman with a chain of paint, wallpaper and hardware stores on the south shore of Long Island. He was a generous man who was well-liked and a respected member of his community. He served as President of his synagogue, Congregation Beth El, and also helped found the Massapequa Soccer League. After retirement, he and his wife moved to Boca Raton, Florida where they enjoyed golf, travel and country club living until his wife Irene passed away in January 2004. Seymour was lucky to find love again and at age 85, he married Esther Levitan. Seymour is predeceased by his first wife, Irene Krinsky and is survived by his second wife, Esther, and his children Andrew Krinsky (Gina),Linda Krinsky (Caryl Pripusich) and Sharon Brown (Michael).He is also survived by his grandchildren and great-grandchildren. We will cherish our memories of Seymour today and always. Funeral arrangements by Beth Israel Memorial Chapel, Boynton Beach, FL. Donations can be made to Temple Beth Sholom, 1050 South Tuttle Ave, Sarasota, FL 34237 or [email protected](a Jewish Breast and Ovarian cancer community dedicated to BRCA research)

Seymour Krinsky passed away in Lake Worth, Florida, on Father&#8217;s Day, June 20, 2021 at the age of 92 at the home of his daughter surrounded by his family. Seymour was born and grew up in Brooklyn, New York. He lived in Brooklyn with his... View Obituary & Service Information

The family of Seymour Krinsky created this Life Tributes page to make it easy to share your memories.

Seymour Krinsky passed away in Lake Worth, Florida, on Father’s...