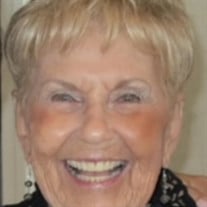 Beloved mother, Nana, great grandmother, and devoted wife to Seymour Panzer and Larry Zadanowsky, 98 1/2 years young, passed away at home July 25, surrounded by the family she so loved. Shirley Marion Gray enjoyed a happy and wonderful childhood in the Bronx with her two older sisters, Vita and Pearl. She adored her father Dr. Louis Gray, a general practitioner in NYC and her mother, Mae, who she looked up to always. Shirley graduated from the all girls Walton High School and was proud to attend the Murray and Leonie Guggenheim School for Dental Hygienists and to work in dental clinics on the West Side of Manhattan. It was then that she met her future husband, Dr. Seymour Panzer, a recent graduate of NYU Dental School. Shirley eventually helped “Sy” establish his dental practice in the suburbs of Massapequa, NY, where they raised their four children, Martin, Arnold, Chester, and Bonnie. She put dental hygiene on hold, except for filling in as Sy’s hygienist for several years. Shirley went back to school to teach dental hygiene, but she was disappointed when budget cuts did away with her job. With the kids grown, Shirley became a travel agent and built up quite a clientele. Along with entertaining and many social activities, boating was a big part of life on Long Island. After Sy retired, they moved to Florida where the lifestyle infused youth. Sy passed away in 1989, but Shirley was happy to have a second chance at happiness when she met and married Larry Zadanowsky in 1994. Larry and Shirley learned to play golf while in their 80’s and traveled the world on cruises. They had a lovely life golfing, dining, dancing, and playing Bridge with friends at their beautiful home in Aberdeen, and in 2018, they moved to Sinai Residences in Boca Raton to continue their love story. Everyone who met Shirley was always taken with her bubbly personality, flare for fashion, and brilliant smile. She was immensely proud of her children and grandchildren and loved that she got to be a great grandmother too. Shirley relished being together with her family, enjoyed a good Scotch or dry martini, and was the life of the party. Shirley will be deeply missed, but she leaves a legacy of love and a zest for life which she found so precious and beautiful. Shirley is predeceased by her son Martin Bruce Panzer, and by her sisters Vita Berzak and Pearl Poretz. She is survived by her husband Lawrence Zadanowsky, her daughter Bonnie (Andrew) Cowdery, her sons Arnold (Jeanette) Panzer and Chester (Mindy) Panzer. Also surviving are her grandchildren Dana (Amy Wicker) Panzer, Alexandra (Jeff) Beaver, William Santa Maria III, Seth (Deborah) Panzer, Marissa (Jeff) Piper, Diana, Sye, and Perry Cowdery, and her great-grandchildren, Eden, Lehava, Lavi, Yehoyada Panzer, Zoie Beaver, and Cameron Ward. In lieu of flowers, her family requests that donations be made to copdfoundation.org.

The family of Shirley Panzer Zadanowsky created this Life Tributes page to make it easy to share your memories.