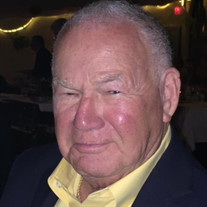 Al (Red) Lehrhoff, age 90, devoted husband, family man and loyal friend, died peacefully on July 31, 2021. At his side were his son Kyle, Erin, his daughter in law and his loving wife of 41 years, Cecilia in his Delray Beach, Florida home. Al was born in Newark, NJ and attended Weequahic High School, after which he graduated Rutgers University College of Pharmacy. Upon completion of his military service he acquired North Arlington Pharmacy. Beyond prescriptions, Al’s community generosity revealed his love of kindness and the human spirit. Later, he founded Al Lehrhoff Sales with his son in law Terry Rucker. Together they built a successful wholesale company. Al was so proud that his son Steven became an entrepreneur and opened Olive That and More in Verona, NJ. A passionate sportsman, he loved sharing New York Giants game plays with his daughter Doreen. However; beyond Professional team fan ship of the NY Ranger’s and Boston Red Sox’s, his true joy was watching his son Kyle, his grandson Sean, and nephews play ice hockey, baseball and soccer. He was thrilled to watch them win many state tournaments. It is no coincidence his birthday fell on March Madness often celebrated with an annual family trip to Las Vegas. Al so enjoyed his retirement years in Delray Beach. He loved the warm Florida sunshine, swimming at the pool with his daughter Debbie and watching his wife, Cecilia play tennis. He always had a way of making sure people were taken care of and had a very generous heart. He was patient, forgiving and provided unconditional love to his family and friends. Al is survived by his beloved wife Cecilia; Loving children Kyle (Erin) Lehrhoff, Steven (Jennifer) Lehrhoff, Debra (Terry) Rucker, and Doreen Lehrhoff; Adored grandchildren Sean Rucker, Graham Lehrhoff, and Adeline Lehrhoff; Al is also survived by his former wife Joyce Blum. He will be sorely missed by all who knew and loved him. A chapel service will be held on August 12, 2021 12:30pm at Beth Israel Memorial Chapel 11115 Jog Road Boynton Beach, FL. Interment to follow at South Florida National Cemetery. Memorial contributions in Al's memory may be made to the Wounded Warrior Project (www.woundedwarriorproject.org) You are invited to view the service live on the day of the service by clicking on the link below: http://webcast.funeralvue.com/events/northstar/58067/hash:5A9BDAFC01A680AA

Al (Red) Lehrhoff, age 90, devoted husband, family man and loyal friend, died peacefully on July 31, 2021. At his side were his son Kyle, Erin, his daughter in law and his loving wife of 41 years, Cecilia in his Delray Beach, Florida home. Al... View Obituary & Service Information

The family of Albert Lehrhoff created this Life Tributes page to make it easy to share your memories.