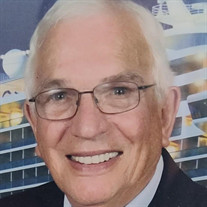 Albert “Alby” Marvin Stein, age 89, passed away on September 8, 2021, in Delray Beach, Fl. No doubt, he was greeted by loved ones and friends for a quick game of stickball with “The Neighborhood Boys”, a perfect round of golf, and a stop at the tables in Las Vegas. He was predeceased by parents, Benjamin and Anna Stein, and siblings, Shirley Lobbe Drucks, Theodore “Teddy” Stein, Jacob “Jesse” Stein, Seymour “Cy” Stein, and Irving “Midge” Stein. He is survived by his brother, Harold “Shifty” Stein, four children; Kimberley Stein, Mark Stein, Melissa Hague, and Andrea Necker. He has nine grandchildren and ten great-grandchildren who join us in mourning his passing. In his autobiography, written for family and friends, he described a full and happy life in his memories from his birthplace in Bayonne, New Jersey, to his retirement in Delray Beach, Fl. He married Barbara Wheeler in Indiana, where he began his family and had two children, Kim and Mark. There, he was involved with the Jaycee’s, the Boys and Girls Club, and various political campaigns. He grew his career in the Textile Industry, which continued until retirement. He later moved to Georgia, and married Jean Millican. He adopted her children, Melissa and Andrea. Later, he moved to Florida and enjoyed time with his sister, brothers, and their families. He was an avid golfer and card player. He met and married Phyllis Slootsky, and in their time together, extended his family, traveled, and created many new memories until her passing in 2013 . In retirement, he met his partner, Rhoda Blank, and continued an active social and family life in Delray Beach, Fl. Any donations in his memory may be made to “Wounded Warrior Project”, as he was proud of his service in the USAF during the Korean War. Services will be held at Temple Beth Israel in Delray Beach, Fl, on September 13, at 11:00 a.m. There will also be a virtual attendance option.

The family of Albert Marvin Stein created this Life Tributes page to make it easy to share your memories.