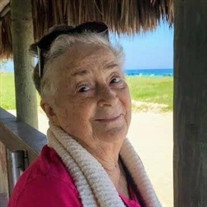 Charlotte Katz passed away on March 29, 2022 in Jupiter, FL. at the age of 91. Charlotte was born in Brooklyn, NY on November 26, 1930, to Mano and Eleanor Feldman. She attended Erasmus Hall High School. She was introduced by her father to her future husband, a young business owner, Nathan Katz. Nat and Charlotte wed in September of 1950 and were married for 66 years. Together they raised three sons in the beach community of Belle Harbor, Queens, where she was a homemaker and active in community organizations, particularly the Rockaway Park Chapter of Hadassah, including serving as Chapter President. Charlotte loved and was loved by her friends and family. Her close relationship with her mother grew even closer after her father passed away. They often worked together at the family home, in what her boys referred to fondly as “Eleanor’s sweatshop,” where Eleanor took on work finishing fur coats. After their youngest son graduated high school, Charlotte began a new life of work outside the home. Earning her driver’s license at the age of 47, her natural gift for retail led her to a series of positions where she helped the businesses and her co-workers succeed. She had a keen sense of style and marketing and a caring heart for those around her. While Charlotte’s earnings provided some extra money, Nat often wondered if she broke even after her own retail indulgences. After Nat retired in 1985, they moved, joined by Eleanor, to Boynton Beach, FL. While there they were proud of the work they undertook helping to found a new synagogue, Temple Torah of Boynton Beach. When Charlotte spotted a new visitor, with a welcoming smile and maternal touch she would enthusiastically encourage newcomers to join the congregation. Once again she played an active role in the life of the community overseeing the Temple gift shop among other duties. As a mother of boys, Charlotte provided a humor-filled model of a strong and independent woman and partner. After the exhausting task of raising three boys, Charlotte was especially joyful to welcome her treasured granddaughters and grandson of whose accomplishments she was unceasingly proud. She is survived by her sons David (Andrea Parness), Marty, and Rob (Ann Blakely); grandchildren Jessie Katz, Emily Katz (Jeff Globerson), Erica Heinrichs (Justin), Matthew Paymer, Hannah May (Jeff), and Sophie Katz (Mason Rodericks); brother, Arnold Feldman; sister-in-law, Myra Feldman, and many beloved nieces and nephews. She will long be remembered for her willingness to share her opinion, her teasing and gentle good nature, her knowing look, and her kind, forgiving smile. In lieu of flowers contributions may be made to Temple Torat Emet 8600 Jog Road Boynton Beach, FL 33472 or www.hadassah.org/donate.

Charlotte Katz passed away on March 29, 2022 in Jupiter, FL. at the age of 91. Charlotte was born in Brooklyn, NY on November 26, 1930, to Mano and Eleanor Feldman. She attended Erasmus Hall High School. She was introduced by her father to her... View Obituary & Service Information

The family of Charlotte Katz created this Life Tributes page to make it easy to share your memories.

Send flowers to the Katz family.