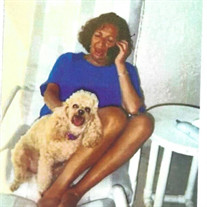 Lenore Marion (Sesofsky) Zeiberg of Boca Raton, Florida passed on June 17, 2022 at the age of 83. Lenore was born on April 10, 1939 in Brooklyn, New York to Harry Sesofsky and Sally Chupack. She lived in Brooklyn before proudly moving to Laurelton, Queens and later Commack, Long Island in the 60s. She moved to Boca Raton in the early 90s and lived at Menorah House Nursing Home for the last decade of her life. She and Samuel Zeiberg were married on September 5, 1959 until his death in 1988. They met outside of a dining hall at Queens Community College where she was studying Hotel Administration and he Culinary Arts. She greatly enjoyed not cooking throughout her life, except for her Italian Chicken and London Broil. She and Sam loved to dress up, go out to eat, and see shows in New York City. She also liked to travel the world with her husband and sister-in-law, Sandra. Professionally, she had a range of careers including her own jewelry business called “Touch of Gold”. She loved going into New York City’s Diamond District to do business. In Florida, she spent years lovingly help raise Carly Cohen as her nanny. When asked, she “liked to drink”, “loved her dogs”, and hated to miss bingo. She is predeceased by Coco, Stormy, Golda, and Holly (all dogs); as well as husband, Samuel Zeiberg, parents Harry and Sally Sesofsky, Uncle Bernard and Aunt Eve (Chupack) Defrin. Lenore is survived by son, Andrew Zeiberg and daughter-in-law Sharyn Rose Zeiberg of Malden, Massachusetts. Grandma Nore was deeply loved and will be greatly missed by her grandchildren Samuel Zeiberg of Quincy, Massachusetts, and Sarah and Harrison Zeiberg of Malden, Massachusetts. She also leaves behind the Dantchik family, and too many friends and loved ones to name. In lieu of flowers, contributions can be made to the ASPCA https://www.aspca.org or Sweet Paws Rescue https://www.sweetpawsrescue.org. Lenore frequently said she liked dogs better than people. If you would like to raise a glass in her memory, Lenore would recommend a glass of White Zinfandel with ice on the side or a dirty vodka Martini with three olives “one black, one green, one whatever”.

Lenore Marion (Sesofsky) Zeiberg of Boca Raton, Florida passed on June 17, 2022 at the age of 83. Lenore was born on April 10, 1939 in Brooklyn, New York to Harry Sesofsky and Sally Chupack. She lived in Brooklyn before proudly moving to Laurelton,... View Obituary & Service Information

The family of Lenore M Zeiberg created this Life Tributes page to make it easy to share your memories.

Send flowers to the Zeiberg family.