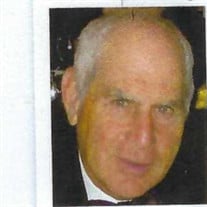 Richard Joel North (1942-2022) Richard Joel North, of Delray Beach, FL, was born September 19, 1942 in Franklin Square, NY. He passed away suddenly and somehow still peacefully on March 18, 2022 with his family holding his hand. After touring several institutions of higher learning in the state of New York, he graduated with a BS in Mathematics from the State University of New York at Stony Brook in 1967, where he met his beautiful bride Ann Kumock. They married in 1967 and moved to Pittsburgh, PA. They relocated to Media, PA (Go Eagles!), staying in the Philadelphia area where they raised their children. Rich worked 20 years at Westinghouse and then 20 years at Boeing as a computer engineer. When the children went to college, Ann and Rich pursued his dream of retirement in the Florida sunshine. He was never happier than when he moved to Gleneagles Country Club and played tennis or golf – and sometimes both – every day of his life. He played competitive tennis well into his final years and was the Club Champion a record-setting 27 times. Shortly after arriving at Gleneagles, his peers convinced him to participate in club leadership, recognizing his even-keeled temperament, sharp intellect, wry sense of humor and commitment to fairness. He served as president of his condo association before being elected to the Gleneagles Board of Governors, eventually serving as club president. As president of the Palm Beach County Tennis Senior League, he converted records from paper to computer entry, and also acted as treasurer of the South County Summer Golf League (and won titles in both!). Rich had a passion for collecting tennis memorabilia, accumulating quite a few unique and impressive objects. He is survived by his beloved wife Ann, son Michael (wife Ketti), daughter Tracy (husband Brian) and five grandchildren (Jaxon, Eli, Louie, Olivia and Gabriela). He is also survived by his sister Jane Burstein and brother David North in New York. His cremated remains will be inurned and memorial details will be shared at a later date. In lieu of flowers, donations can be made to the Maccabi Games tennis program (1511 Walnut St., Suite 401, Philadelphia, PA 19102) or Play for Pink (15413 Strathearn Drive, Delray Beach, FL 33446).

The family of Richard J North created this Life Tributes page to make it easy to share your memories.

Send flowers to the North family.